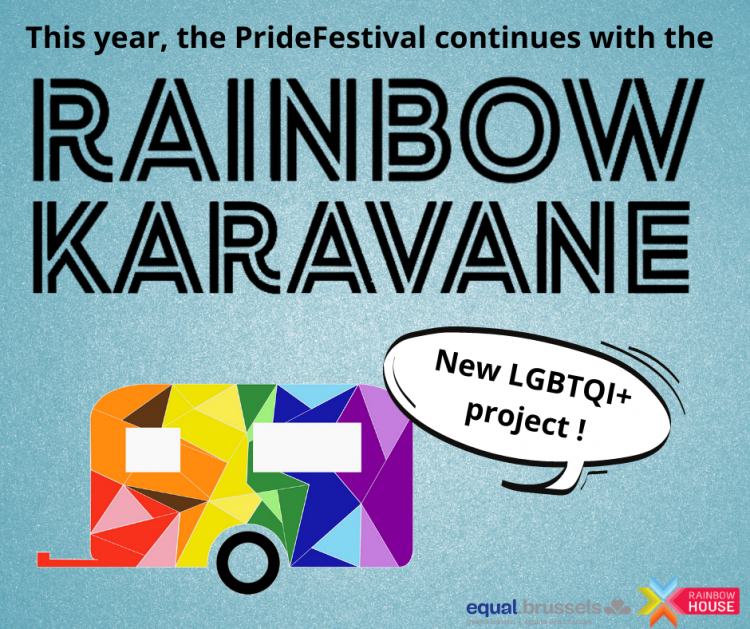 🌈 The Rainbow Karavane is a series of LGBTQI+ themed events organised as part of the PrideFestival. Come and meet with LGBTQI+ associations! These events will be accompanied by a socio-cultural event. Workshops, concerts, exhibitions, films, debates… the possibilities are endless!

The caravan symbolizes the movement of LGBTQI+ associations in the different municipalities of Brussels. There won’t be a real caravan, but instead there will be a lot of nice activities!

Each “Karavane” will be organised in collaboration with a Brussels local authority. In 2020 and 2021, the Rainbow Karavane will take place in 5 different municipalities: Anderlecht, Saint Gilles, Uccle, Watermael-Boitsforts and Ixelles.

Goals pursued by the project:

The majority of LGBTQI+ activities are still too concentrated in the city centre of Brussels, especially around the coal market street. The Rainbow Karavane will give visibility to the work of LGBTQI+ associations in Brussels, but also to LGBTQI+ culture. And that, outside the city centre!

Here is a list of the goals of the project:

– Organise LGBTQI+ activities outside the city centre of Brussels

– Visibility of the work of LGBTQI+ associations in Brussels

– Visibility of queer talent in Brussels

– Offering safe spaces to think and build together a fairer society.

For this first Karavane, come discover Deborah Gigliotti’s photos showcased in the windows of La Vénerie / Espace Delvaux, the cultural center of Watermael-Boisfort.

The “Backstages” expo will show you what happens in the backstages of the drag shows and burlesque cabarets of Brussels. For 5 years, the artist has had the privilege of taking pictures of what happens behind the curtains, stairs and walls that separates the scene from the backstages.

From Manko to the Mademoiselle Cabaret and passing by Chez Maman, Deborah wandered in the backstages, between the wigs, feathers and glitters. She photographed the moment, the transformation: a mouth being redrawn, a dress that sublimates, a heel that elongates, a perfume that marks the end of someone and the beginning of a character. And all of this to entertain you but also to make you wonder.

From Maman, Jean Biche, Mademoiselle Boop to Lolly Wish, among many other talented artists, come discover or rediscover those international stars who animate these cabarets.

Link to the agenda : here

🎵 Join us for the premiere of the dance film “SAKU” by choreographer Yves Aduhire with the Wild Kidz Party troupe! Directed by Fransisco Lumezo.

It’s not always easy to cultivate a good self-esteem… However, it is essential for the stability and personal fulfilment of Saku, a 25-year-old androgynous person. He will then throw himself body and soul into a quest of self. SAKU is a show that addresses issues linked to social perception and how it affects self-development, especially when one belongs to an identity or gender that society does not recognize.

Before the movie begins, come and listen to the stories of artists from Brussels during which they will share their experiences as LGBTQI+ people of color in the cultural milieu (+/-15min). Then comes the screening of the movie “SAKU” written by Yves Aduhire and, directed and scripted by Francisco Luzemo (+/-10min). Immediately after that, let’s meet for a discussion with everyone who worked on the movie (+/-15min). They will talk about the project itself, the creative process and some of the movie’s themes like masculinity and its deconstruction. Don’t forget to stay until the end to see the behind the scenes of the movie!

Link to the agenda : here 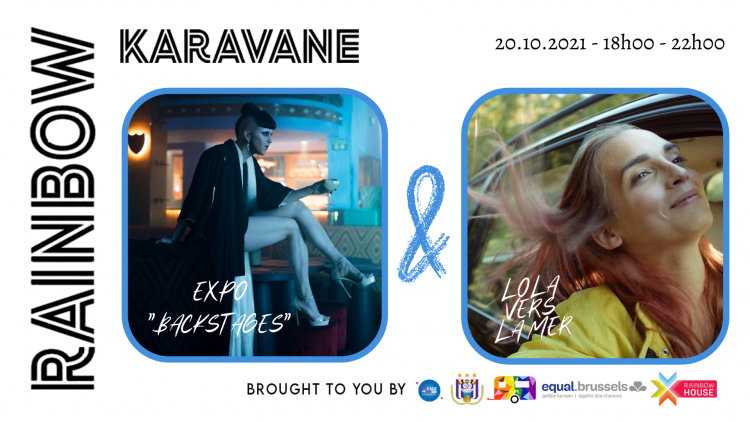 (this event is in French)
Looking for a cultural evening with an LGBTQI+ theme outside the city center? L’Escale du Nord and the RainbowHouse offer you a vernissage and a movie debate as part of the Rainbow Karvane*:
On the program:
6PM: Opening of the exhibition “Backstages” of Deborah Gigliotti in the bar with a drink of friendship
7PM: projection of “Lola vers la mer” (87′):
8:30 pm: animation / intervention on transidentity by Clay Pier of CHEFF (60′)

“Backstages” presents the backstage of Brussels’ burlesque, transformist and drag cabarets. For 5 years, the artist has had the privilege of capturing what happens behind the curtains, partitions, stairs and walls that separate the stage from the backstage area.

About the film “Lola to the Sea”: Lola, 18 years old, bleach blonde hair, lives in a foster home with Samir, her only friend. Impulsive and lonely, she is trying to get her diploma as a veterinary assistant. When her mother passes away, her father Phillip makes sure that Lola will miss the ceremony. Two years before that, Philip was throwing her out of the family home: at the time, Lola was still Lionel – Philippe is determined to fulfill Catherine’s last wish: to be dispersed to the North Sea, in the dunes of her childhood home. Lola on the other hand is furious against her father, but she will not leave her mother alone in this last journey. So they take off together, both unwilling to share a car but determined to take Catherine home.
*More info about Rainbow Karave: http://rainbowhouse.be/en/projet/11024/
Link to the Facebook event: Here
Link to the agenda: Here

👁️‍🗨️ But wait! There is more. This is only the beginning of the Rainbow Karavane program. Other surprises await, so keep an eye open on our social media and on our RainbowHouse website.

❣️ With the help of equals.brussels 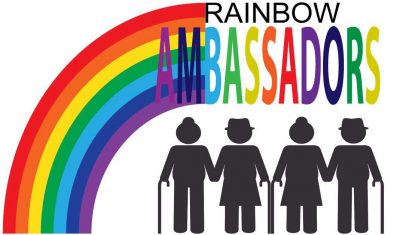 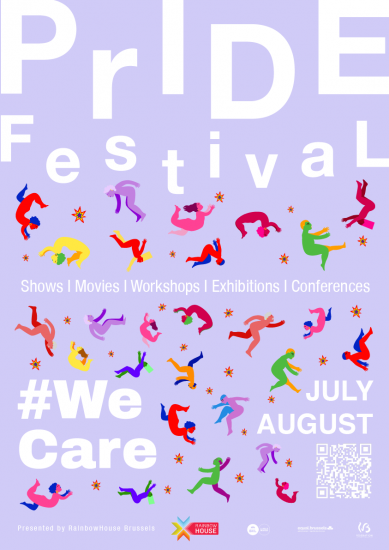